So you've moved to Colorado

Passions. I pay close attention to what I am passionate about.

I am obsessed with being outdoors...I have to have some outdoor time each day. In the beginning of my move to Colorado, I’d sit on the back patio in the morning, aka a slab of cement eight feet from the fence line stretching along the side of the house. I’d steep my English breakfast tea and stand outside in the sunshine shining on my roommate’s patch of sunflowers and enjoy the cool before the heat.

I think I adjusted well enough to the heat, but I still miss the rain. A coworker told me in late July that we were heading into monsoon season. I pictured Vietnam, where it rains nonstop for a month during monsoon season. Or I remembered the August storms of New York where you’d watch the clouds change on the horizon and wait in anticipation as the energy of the air became charged with electricity.

But a Colorado monsoon, at least in Grand Junction, is the equivalent to an afternoon thunderstorm once a week. And the large raindrops that do fall evaporate within the hour. I thought I would be happy in a place of eternal sunshine. But after a move, it’s difficult not to compare to where I’ve been before.

The reason I moved to Colorado was to change my long distance relationship with my boyfriend to a “close-distance” relationship. Ever since last Christmas I’ve been telling my family, friends, and some employers that my plan was to get a job in Colorado and move out there in 2019.

It’s not like I’ve never moved before. I moved to college in Massachusetts, and moved to New Zealand. But this was different. Even though Colorado is much closer than some places I’ve lived, this move didn’t have an end date. College was a four year commitment, and I had to return home when school was closed. New Zealand was always going to be temporary, 1-2 years max.

And while the goodbyes were always painful, there’s something a bit gypsy about me where I can’t stay somewhere too long before I have to leave. To leave means to grow. To learn. To make new friendships and homes. So that anywhere I go I can know someone, and have homes scattered around the country or even the world. It’s the process of knowing that in order to say hello to someone new you will need to say goodbye to someone else you love.

The irony of it is that when I leave a place, it’s usually at the point when I feel most rooted and stable there. As numerous personality tests have told me, I love stability. What they don’t know is that I love adventure and learning more.

When I first moved back to Newburgh, I resented it. I resented the cold of winter, the lack of a job to keep me distracted, and mourned the loss of the home and friendships I hadn’t said a proper goodbye to. That mourning lasted a year, each month counting how long it’d been since I lived in that home for the last time. But even as I mourned, I began to build a life in New York.

My childhood best friend, who made a point of keeping in touch over the years, reached out to me in this depressing time. We had fun, trying out new restaurants or grabbing coffee. And she listened to me talk about New Zealand, understanding my feelings on a level not everyone could. Through her I found a church that year, though that didn’t start to feel like home until her soon-to-be husband invited me to join the worship team with my violin. Because I returned to New York and our renewed friendship, I got to play a small role in their wedding. I will always treasure that gift.

She wasn’t the only who supported me. A friend from Massachusetts also found herself out of a job suddenly, so she came to New York for a week in January to hang out but also job search together. She was there when the local newspaper responded to my resume with a request for an interview. Through that part-time gig I officially became a journalist. And that opened up a whole new realm of possibilities and learning.

During my time as a journalist I met local politicians, got to know café and shop owners, and interviewed environmental activists. Before each interview I would feel a familiar sense of nerves. Meeting new people, as an introvert, made me apprehensive. Especially if I had to go somewhere I had never been before. But at each interview another part of me kicked in, one that is confident and curious. And I loved it! I loved meeting new people, and asking them any question I desired. The reward of it far outweighed my shy tendencies.

Even though when I first returned to Newburgh and announced that it was temporary, I softened over time. I developed a community, with the help of my best friend and the group of women we invited into our homes for tea and Bible study. Despite living at home, my parents and I found a new rhythm, and my college friends reassured me that I was doing the most cost-efficient thing.

But I anticipated that one day something would disrupt the stability I was building. I thought it would be a job opportunity I couldn’t pass up. Perhaps it would be moving out into an apartment on my own, or cultivating financial independence through different part time jobs. What I never expected was for Jeff to come into my life. 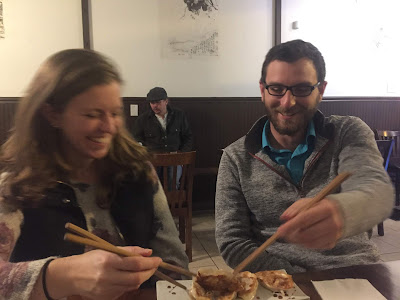 For those who don’t know, Jeff and I met at a wedding in Denver. We talked outside the barn watching the sunset. I discovered he had lived in Newburgh for six months during his chiropractic internship. Less than a week later he flew out to New York to take me on a date. It didn’t take long for us to develop a deep, committed relationship. He even joined my family for Christmas. Afterward, I started telling everyone that this year I would move out to Colorado. It seemed like the open door, the disruption I had been expecting.

You see, I had been job-searching using LinkedIn, Indeed, personal contacts for two years with no luck. Despite getting many part-time and freelancing gigs, that full-time job and income that could enable me to be independent still eluded me. The notion of finding a job in a whole other state, especially somewhere near Grand Junction where Jeff lived, was daunting. But I kept saying it.
I would have maybe started to question my resolve if it hadn’t been so easy finding a job. It was the first and only job I applied to out in Colorado. Jeff was talking to a friend from high school, an editor at a local magazine who was stressing about needing to hire a new editor. And he said, “I know a writer, but she’s in New York.” A month later I sent her my resume, a few weeks after I was in town and interviewed in person. It took a little while, but by May I was offered the job.

So here I am, moved to Grand Junction, Colorado. Working as a multimedia editor. It’s exciting, it’s scary, it’s new. I’m 2.5 months in, and still stuck in the not-fun stage of church-hopping, building a community and missing the one I just left. But as far as disruptions go, Jeff is one that I am so, so grateful for. He’s the one who is encouraging me to tune in to my passions, to do what I love.

So I’m starting small, with morning tea outside in the sunshine.