Admit When You Are Wrong 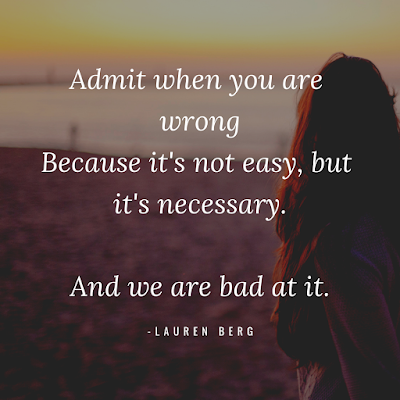 As a recent Atlantic article pointed out, we are all angry. We get angry about drivers that cut us off in traffic, about long lines, about things our close friends or family members do or say.

In many ways that is our own choice. We can choose to be offended or upset by something, even though it was probably not that person's intention to offend.

But other times people are straight up offensive, aggressive and rude. Sometimes we just want the offending party to say that they were wrong. But that rarely happens, especially on social media. Our anger continues.

Maybe we said or did something kinda harsh to a friend or family member.


Confession Time (High schoolers can be the worst...including me)

I once compared a high school friend's make-up to looking like they had a black eye. Gosh, why did you say that Lauren? She is your friend! Embarrassed, my subconscious successfully convinced myself to forget I had ever said it, that she would care at all what I thought or said and that it was no big deal.

When I realized over the next few days that something was wrong, I asked her if everything was okay, and she gently reminded me of that comment. She was hurt and confused, and even worse I had said it in front of a group of people! That's the worst feeling, to realize "Oh my god, I did something wrong and hurt someone I really care about." Luckily, she had the courage to be completely honest with me, and the profound grace to accept my apology. And that, perhaps counterintuitively, opened the door to greater vulnerability and trust in our friendship.

But apologizing isn't usually our first reaction. Sometimes our ego chooses denial, and we might make it worse by saying "I'm sorry you feel that way." Ouch. Way to make the recipient of your apology feel like they're crazy for having felt bad in the first place. For having feelings at all.

Other times we try to explain away why we said those hurtful things "I was just really tired, I didn't sleep at all last night." "I'm just going through a lot." "I wasn't thinking." "It was supposed to be a joke."

Context helps, but it doesn't amount to an apology. 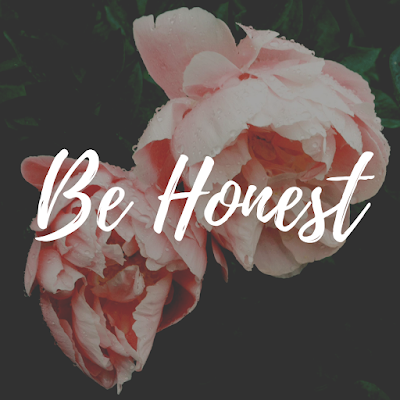 Sometimes our defensiveness raises up past or unresolved resentment in us. Especially if we view the person's feelings as hypocritical. We point the finger back at the other person for grudges we may not have realized we held against them. "I'm five minutes late? You're ten minutes late every other time we meet up!"

Of course, if you have a lot of experience in conflict resolution, you'll know that using "I" statements is better. "I feel upset that you are accusing me of having bad communication, when I noticed you regularly do not respond to my texts."

Maybe you finally told the other person how you are feeling. That's good! In this case, the first step you need to take is admitting that maybe you should have brought up these feelings you have been holding on to beforehand. But it's okay if you are learning to do this later in life.

We are taught as kids that "If you don't have anything nice to say, don't say anything" But that inadvertently taught us not to address conflict. Conflict, frankly, is not nice. But it too is necessary.

I remember a typically joyful six-year old camper being upset and refusing to talk to anyone during one of the last days of camp. On this day we made all the campers stop for about an hour and write thank you notes to the camp's donors. Except his thank you note started with "I'm having a bad day. I'm angry because..." Unfortunately, one of the counselors noticed and took it away before he was able to finish. However, it would have been much more valuable for him to have written out his feelings, which then counselors could use as a starting point to reconcile and help him work through his feelings, and address any potential misunderstanding or wrong-doing on their end.


Don't avoid conflict...but be ready to admit when you were wrong.

So here's my encouragement to you (and me too):


Don't avoid conflict. Be willing to be open and vulnerable and honest with the people in your life.

Some people won't be able to handle it, and they might choose to exit your life. And you probably will be a lot better off without those people, because they never really allowed you to be the real you in the first place.

Most importantly, go into those conversations with the ability to listen to the other person and the knowledge that you might be in the wrong, with the willingness to accept responsibility and apologize. You know that's what you would like to receive from the other person. But often we don't get something until we start giving it.

When your gut starts giving you that uncomfortable feeling (you know that feeling), that's your cue to take the next step and admit when you are wrong. Not to provide excuses, not to to get defensive, not to deny it or turn the tables and air your grievances out. That inevitably happens, despite our best intentions. But to admit that we can do better, and that we want to.