What you need to know about New Zealanders

For flying half way across the world, New Zealand isn’t all that different from the US. Unlike India, or Asia, New Zealanders all speak English (in very endearing accents). In many ways they are culturally similar to the British, favoring cups of tea or fish and chips and going to the pub to watch rugby or cricket. They have their own version of home makeover shows and have been entertained watching the current U.S. election unfold. However, there are a few things that might catch you off guard your first time in New Zealand:

1.     Kiwis- There are three types of “kiwis” in New Zealand. There are the kiwi fruit, the kiwi bird (an endangered flightless bird found only in New Zealand), and the kiwi people, i.e. New Zealanders. To clarify, the New Zealanders got their nickname of “kiwis” after the bird, not the fruit. They are very proud and protective of this bird.
2.     Australia- There is a bit of a rivalry between Australia and New Zealand. Kiwis will often tell you to not go visit Australia, because there are so many things that can kill you there (snakes, spiders, crocodiles). I’m sure it’s not all that bad, but why take the chance? They will also remind you that they beat Australia handily in the last Rugby World cup final. Don’t tell them their accent sounds Australian.
3.     Vegemite- is a salty spread used on toast with butter. It is definitely an acquired taste. And it is made in Australia, but New Zealanders will still claim it as their own.
4.     How’s It?- If you have spent any time in the United Kingdom, you won’t stumble as much over their slight idiosyncrasies, such as calling hiking “tramping,” pick-up trucks “yutes,” and shopping carts “trolleys.” There’s too many to list, and I won’t pretend to know them all (not to mention the whole world of teen slang), but don’t make my mistake of replying to “How’s it?” with “How’s what?”. Just say “good” and move on.
5.     The Dangling Preposition- If you hear someone saying “Sweet as!” they are neither going to finish that comparison, nor are they referring to your behind. It’s used for emphasis, similar to our “cool!” or “awesome!” except it’s more open to variation, such as “Bro, I’m tired as!” (It’s very kiwi as).
6.     The Rest Room- A couple of friends, while road tripping around New Zealand, once rushed into a church and asked some older ladies if they could “use the rest room.” Looking slightly confused, a lady led them to a cool dark room with comfy chairs, to which my friends looked at each other thinking, “Where is the bathroom??” New Zealand, to many locals, doesn’t have rest rooms. It has toilets. So don’t worry, it’s not considered crude to ask, “Where is the toilet?” at least if you want to get the answer you are expecting. 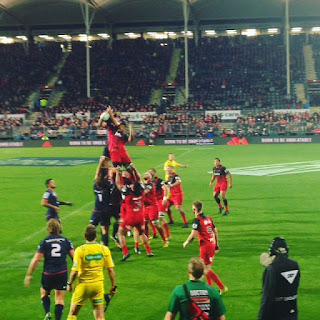 7.     The All Blacks- is New Zealand’s national rugby team, which has won two rugby world cups in a row and has broken many records. Easily the best rugby team in the world. They do in fact wear all black, and perform a haka directed towards their opposing team before they play.


8.     Maori- Before Europeans arrived, New Zealand was settled by the Maori people, of Polynesian origin. Luckily they do not have as sad a history as do our Native Americans, and actually you will often find references to Maori culture in pop culture or tourism attractions (you are probably still wondering what a haka is). Town or street names also are often in Maori. *Pronunciation tip: “wh” is pronounced “f.”

These are just a few tips that just may help you gain the respect of a local kiwi. Personally, I've found New Zealanders to be some of the most hospitable, kind, and adventurous people I've ever met. They are definitely worth getting to know. Lucky for you, most of them really like Americans, so you're already off to a good start!
Labels: New Zealand