Part 1 of the Series "Searching for Home" 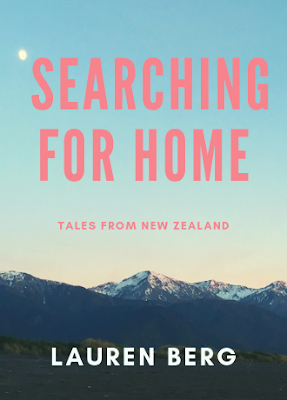 How to describe Kaikoura, New Zealand?

I’m sure there are places that are comparable in America. But having grown up in upstate New York, and attended college in Boston’s north shore – the only two places I had called home up to that point – Kaikoura was a whole new world.

My first day in Kaikoura for my study abroad program was grey and overcast. The staff promised us students that behind those clouds was a majestic mountain range. I couldn’t imagine it. Luckily, I didn’t have to wait long.

If a home is anything, it is familiarity. So when I first saw the Kaikoura Seaward range — snow-capped mountains that seemed to stretch halfway up from the horizon to the heavens – I had mixed feelings. Yes, Mount Fyffe was impressive. But it wasn’t like the mountains in New York.

In New York’s wooded and hilly Hudson Valley region, you never know where a road might take you. Around the corner might be farmland. Reaching the crest of that hill might reveal a lake below. You never knew. I had a tendency to get lost.

But in Kaikoura, it was impossible to get really turned around. Even if you didn’t have the ocean as a guide, or the hill of the peninsula, you could always see Mt. Fyffe. I resented it at first. It almost felt like the mountain was spying on me, watching my every move. It towered over the flatlands of dairy and sheep farms. From its peak, the lights of town twinkled along the shoreline below. It could see everything and everyone in Kaikoura.

Over time, however, this familiar face became a comforting sight. From the breakfast table to Sunday bike rides to church, to morning runs to the beach: there’s Mt. Fyffe. It often showed off spectacularly in the sunrises and the sunsets. Each point around Kaikoura offered a slightly different angle of its face. Sometimes it was simply breath-taking.

In native Maori culture, a person introduces oneself by first describing where they are from, their tribe, and last of all stating their name. For our Te Reo language class, we learned to identify our mountain, our ocean or river, and our family. I began the semester saying Mount Beacon was my mountain. But by the end, Mount Fyffe was the maunga I identified my identity and home with the most.

Did I really know Mt. Fyffe though? A friend once told me, “beauty is danger from a distance.”
One of the last weekends of that semester abroad I and a few other students realized, with shock, that we had yet to summit Mt. Fyffe. It takes a bit to climb the 1,602 meters (5,256 feet) starting only slightly above sea level, so we planned to sleep over in the hut three-quarters of the way to the top, and then summit it in time for sunrise the next morning.

But the six of us arrived at the 8-person hut in the mid-afternoon to find it full. We had only one two-person tent. We didn't realize that it was the last weekend in October — their Labor Day weekend. However, in classic New Zealand “no worries” fashion three of us opted to sleep out under the stars, the other three squeezing into the tent.

A lot of people camped out on that hillside that evening, and we befriended one guy John who had pitched his tent right before we arrived. He had driven up from Christchurch in a rush thinking he was late to meet his friends there but then found himself alone, with us, outside the hut. We had hiked up with a guitar and deck of cards, and even though I think we weirded him out a bit, John hung out with us until his friends arrived, and even later too.

After watching the sun set behind the mountain ranges, we set our alarms for 4:00 am to wake up and hike the hour and a half left to the summit. John thought we were crazy.

Of course, we hadn’t checked the weather before planning our mountain excursion.

Around 3:00 am a gusty northerly wind started howling over the mountain. I doubt any of us slept much before our pre-dawn alarm. And we weren’t the only ones up at 4:00 am. Many of the people in tents started packing up camp and leaving. I watched a sleeping mat blow away. We put all our stuff in the one tent hoping it would be there when we came back.

We started up the trail, still in the bush line surrounded by short alpine scrub. It started to rain. The wind became so gusty we paired up and linked arms so we wouldn’t get blown over. We hiked for about a half hour before we stopped and reassessed.

“With this weather, there won’t be a sunrise anyway.”
“I felt a piece of hail hit me,” I offered.
“Is it  really open at the top?” we asked Jack, the only one who had been up there.
“Yeah, it’s just a big open area that drops off on either side.”

We were a little worried we might get blown off the mountain, so we turned around and arrived back at camp just as the sun started to rise.

And this is where the story starts to get really crazy.

The wind started really picking up at this point. We packed up camp, only to find out the tent poles have been bent. I went to use the outhouse, which was a slightly terrifying experience (feeling the wind howling BELOW you in the vents, while also worrying the door might rip off), and when I come out my friends were holding my pack, saying it started rolling away in the wind.

The trail down had a few hairpin turns. We said goodbye to John, but before we could get 15 minutes down the trail we reached a curve that turned north, the direction from where the wind was blowing. I watched the two girls in the lead, arm in arm, lean into the wind doubled-over, trying to take a step forward, and then get blown back onto their packs. We paused, and huddled in the protection of the hillside before the turn to get a bandage out for a cut. But mostly we are stumped: how do we get around this curve? We considered waiting it out, for a lull in the wind. We tossed large pieces of gravel and rock from the trail into the wind and watched them stop and do a 180 flying away out of sight. I felt personally responsible later when we learned houses at the base of the mountain had windows broken from rocks flying off the mountain.

It’s at this point that John caught up to us.

“Oh, hello. Um, is everything okay? You guys didn’t make it very far.”
“Yeah… we can’t go around this curve because of the wind.”

John obviously didn’t believe us. He walked a little bit ahead and stopped, crouching into the wind like staring into a hurricane. He came back to us and we started to strategize. Waiting would take too long. So we army crawled. Through the long grasses on the side of the trail, lying flat when an especially strong gust came by, we crawled on our legs and torsos for nearly 100 meters. Eventually, we got low enough below the wind tunnel that we could stand up and continue.

As we slowly wound our way back down the mountain, we would hit smaller pockets of wind tunnels. At one point Jack, who was carrying the guitar like a backpack, felt the wind pick him up half a foot, the guitar case acting like a sail, and throw him into the person in front of him. At other times the wind picked up the pieces of gravel from the trail and threw dirt and rocks into our faces. So not only were we swaying down the trail, buffeted by the invisible forces of wind currents, but we started to do so with our hands covering our faces half blind.

When we could see, we looked down the trail winding below us and saw something that particularly worried us. We called it the Bridge of Khaza-dum. It was a stretch of track completely exposed to the elements, with steep hills on either side (not quite cliffs). Most of us decided we were going to make a run for it. But we got caught in a tornado of whirling rocks earlier than expected. A few made it through the wind tunnel, but as I ran, covering my face and gritting my teeth against the flying debris, I felt the wind try to blow me off the track, and I dropped down to the ground. Every time I felt a lull and tried to stand up with my pack, another gust would come through. John came crawling back to help me and another. As he passed me he asked, “Are you okay?” I stupidly responded, “Yep!” Obviously, I needed help, but he made a shocked face and moved on past me. My roommate ended up running back, grabbing me by the pack, and racing me forward towards the sheltering hill.
"Thank you," I said and smiled. The people around me looked and gasped. “What is it? Am I bleeding?” I said starting to feel my face. “It’s your teeth…they’re muddy.” In gritting my teeth against the swirling dirt, I guess I had acquired a bit of a grotesque smile, one that actually had just scared John away.

Finally, more than halfway down the mountain, we were out of range of the wind. We stopped and looked at each other and laughed. With our unkempt windswept hair covered in dust we certainly looked like wild people.

Inexplicably, minutes later a couple walking down passed us, with their clothing and hair perfectly intact.

Although our windy Mount Fyffe adventure certainly was unexpected, I didn’t feel scared at all during it. We later found out we had experienced 100-200 kilometer per hour winds (62-124mph). We passed large, freshly uprooted trees on the drive home. Maybe we should have been scared.

To subscribe to read more of the series, visit https://channillo.com/series/searching-for-home/