I don on a backwards cap, a red and blue checkered flannel, and at the opening notes to MKTO's "Classic" I dramatically thrust open the double doors and run out onto the patio stage, high-fiveing the audience of 10-15 year olds before getting into position for our band's short dance routine. "I'm Bradley, and I'm the rebel," I say in my best British accent, which is usually quite horrendous. "Charlie" and "Nigel" and I complete the rest of the skit, and moments later after a quick transformation I run up to my campers as Lauren and say, "Oh hi guys. How's it going?" And because I'm hyped and alive and ready for the day, I usually jump straight into teaching them a new game.

How did I get back here, back at Adventure Camp for another summer? 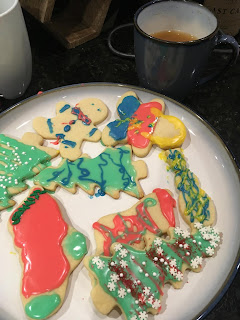 Last November I met up with some other earthquake survivors in Massachusetts's north shore, around the one-year anniversary of the Kaikoura Earthquake. After spending several hours baking and decorating sugar cookies and catching up on life, we took a pause from playing Settler's of Catan to eat our pizza and that's when it happened. It only took one prompting question, asking us how we were processing the anniversary, which resulted in us talking for hours about that shared traumatic experience. We talked about how we processed it, about the analogies we adopted, about the slow realizations. About the loneliness, the depression, the grieving of lost dreams. By the end of that time the majority of the group who had not returned to New Zealand after the earthquake realized that those who had returned had processed it much better than we had, or ever could, from the States.

The next morning, catching up with a friend who also had been yearning to return to New Zealand, I suggested a proposition: If I don't get this job I'm in the late stages of interviewing for, would you want to go to New Zealand this March? Yes. Yes, she would.

It's a month later and the job fell through but my friend is telling me she just got a promotion so she can't take the time off. I spend the next couple of weeks trying to cajole other friends to join me, but in the end I buy the tickets alone.

I decided this year, 2018, was to be my year of Adventure. It was a prophecy I decided to prophesy over myself because after 2017, a year spent in necessary recovery, I was starting to get bored. I was starting to feel I was ready to be "myself" again, which I decided meant being less safe and less quiet. Shortly after booking my tickets I applied to work at Adventure Camp that summer. 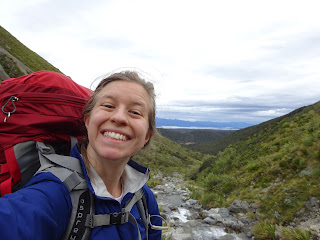 Two months later I'm stepping onto the trail with my full hiking pack, ready to start my four day solo hike of the Nelson Lakes region. Half an hour in, I am relieved to hear the voices of two cheerful Kiwi hikers hail me as they come down the trail. They tell me about the accommodations I am heading for that evening, about how one guy has hiked in his socks for the past four days, and finally wished me luck as they headed towards the carpark. I take their blessing to heart as I continue the next two hours alone through the forest, stepping over roots, crossing a river, stopping to listen to the birds, and only losing track of the trail once.

I become someone new on the trail. Someone who easily befriends strangers, who becomes familiar with the trail talk of asking where people are from, how long they are in the country, where they are going from here. It is easy to be friendly, to enjoy the view, to shoot the breeze. I take each traveller's "good luck" and add it to my quota of daily blessings. I am empowered by it. Other times I sing the hymn, "you will not let me go so I will trust in thee, you won't let go so I will rest," as I climb the boulders along the ridge trail with views of lakes and mountains and valleys stretching out to my left and my right, behind and in front of me. And in my moments of uncertainty, discouragement or loneliness I find God often gifting me with a friend, or some beauty I could not have thought up for myself. 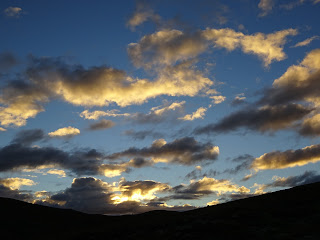 I arrived early to my last hut on the trail, so I sit on the porch alone, thinking, clipping my nails, reading, biding my time and talking to whoever passes by and decides to sit beside me. That night, I climb the hill up behind the hut to try to get a good view of the sunset, but behind each hill I crest I find another hill, so I finally stop and sit atop a rock and alternate between looking at the golden clouds above and at the shimmering lakes below. I sing, I pray, no one around to hear me. No other sound but the grasses rustling in the wind. In the early hours of the night, not being able to sleep and hearing the sound of mice moving near my head, I go out to use the toilets, but mostly to marvel at the stars. A clear night, with no light pollution. The milky way stretches across the heavens. I find the upside down Orion and the Pleiades, and follow them over to the right where the southern cross is rising. They are all so bright, more stars than I've ever seen. I watch them alone, but do not feel alone.

Two weeks later I stand outside the Mt. Fyffe hut with my friend as well as the Belgian and Canadian we befriended that night, and we gaze up into the milky way looking for shooting stars. I keep missing them, getting distracted by the lights of Kaikoura below, and the dark misty expanse of the ocean on the horizon. It's a moment that shouldn't end. If it weren't for the cold, or the tiredness, or the crane in your neck, who would ever voluntarily stop looking at a starry night? I finally see a few shooting stars and head to bed.

I try to hold on to moments like these. They can feel like a pleasant distant dream, but they are real. They happened to me. They are a part of who I am.

There is a wholeness I felt upon my return to the States. There is closure, there is healing. But I didn't realize the extent of how I changed until I started working Adventure Camp. In the healthiest of times, it is a place where everyone, no matter how weird, can be fully themselves. If I start singing a song and doing a little dance while waiting in line for dinner, no one will care. If I start chanting "speech! speech! speech!" other people will join in. One day we'll be sitting in the basement humming on kazoos, another day we are arguing about the Pixar Cars universe, or whether Lasagna is technically a sandwich. We are wild and free humans who have been sweating all day and are slap-happy tired but ready for another adventure, a new memory.

It is in that environment that I find I am stronger than I was when I last worked there three years ago. I try my hand at counseling again, and that first week face the hardest group of kids I've ever had to work with, but they did not break me. I watched in slight amusement as they tried to bully me, undermine me, and were constantly lying to me, and wondered what their goal was. To see me cry? It was disappointing, it was frustrating, but at the end of the week, as I sighed in relief lying on the floor of my room that Friday evening, no tears came. I got up, went downstairs and found a new adventure.

Later in the summer I realized my capacity to feel fear had decreased. In the last few years I have seen a tint of the darker side of life, and suddenly things such as heights or falling or getting hurt aren't scary anymore. I jumped from the Leap of Faith four times, I rode the half-pipe "bro bowl" while mountain biking (a sport I had only tried a few times before), and climbed the extension ladders to set up the high course elements without feeling anything. Maybe a slight shaking in my legs as I stood balanced at the top of the ladder uncoiling the p-chord with both hands and leaning against the tree.

What I do fear now, though, is goodbyes. I cried for the first hour driving away from New York on my way to camp. And then I cried nine weeks later on the drive back. Each place I go I start putting down roots in the community, creating friendships with the people I am around. Even if I know it is temporary, I can't help it. Then when it is time for me to leave I feel like a part of me is being ripped out. I don't know where my home is. My home is everywhere I have been, not confined to one place. I'm always leaving home  to go visit another home or make a new one. It is a gift and a curse. It is part of this adventurous life I have chosen.

I have four months left of this year of Adventure, and I woke up this morning telling God I'm ready for anything. Somedays I have the heart for it, other days I get discouraged and travel-weary. But I'm beginning to believe the Adventures won't end at the conclusion of this year.