I was anxious last year when I was about to leave for New Zealand.

Last year I was afraid that New Zealand would be a repeat of some of my negative experiences in the Dexter House community. I was afraid of leaving my friends behind, of FOMO, of missing incredible experiences.

But what actually happened was that I had one of the best semesters of college. I loved the classes, the community, the place. And even though it was far from perfect I could've stayed another semester. It was when I came back that I realized the world and people I was returning to was completely changed.
While I had been having the best semester of my college life, some of my friends were having the worst. Break-ups, car accidents, lost friendships, illness. In New Zealand I had very little internet access and was bad at keeping in touch, so I had no idea. I came back and felt shocked, guilty, and depressed even. All I wanted to do was go back to New Zealand. This New England world I returned to was like a bad dream: a brutal winter on top of revelation after revelation from my friends of the hardships they were enduring.

I just wanted everything to go back to normal, for my friends to be okay or getting better. It's selfish really, though not necessarily a bad desire. And a lot of them are doing better, but some of them are not. So I feel guilty, because now that I realize they need me I want to be there for them...but I am leaving. FOR TEN MONTHS. This time it's not missing out on incredible experiences that I fear, but the guilt and fear that I'm leaving my friends behind when they need me most. I am almost tempted to reconsider going... 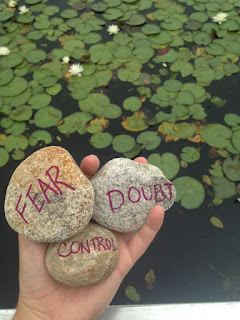 BUT. I know New Zealand is where God wants me. I know it's going to be good, and that I'm going to do a good job there. It's just going to take a little bit of trust. Last year I went with one of my best friends to the pond on campus and we each threw three stones into the pond to represent our fears for our upcoming semesters abroad. It being a year later, and full of fears, I decided to throw my fears, doubts, and sense of control into the pond. I'm leaving them behind, choosing to be hopeful for this upcoming adventure. It's an active choice I have to make, to trust God and his timing. But I'm working on it